Rokhsareh joined the firm in 2017 as a Sanctions and Banking Specialist. She assists Iranian individuals and companies in relation to all aspects of UK law as well as non-Iranians with their Iran-related matters. Rokhsareh’s connections and familiarity with the political and legal systems of Iran, US, and UK allow her to assist her clients in an assertive and comprehensive manner.

Rokhsareh was born in Iran, raised in the United States, and has lived in England since 2015. She speaks fluent Farsi (Persian), English, and basic Spanish.

Rokhsareh earned her Bachelor’s, Master’s, and Doctor of Jurisprudence degrees with honours and qualified as an attorney in Texas in 2010. She worked at the Texas Supreme Court before graduating as a lawyer. As an American lawyer, her practice focused on sanction law, commercial litigation, and civil rights.

Rokhsareh completed her LLM in International Business and Commerce Law at The University of Manchester in December 2016, and she has been working as a legal professional in England since then.

Rokhsareh has executed a variety of matters pertaining to Iran and Iranians living abroad. She has successfully executed dozens of cases on behalf of individuals and businesses against high street British banks for bank account closures and restrictions. She has also assisted businesses in relation to their trade with Iran in line with US, EU, and UK sanctions. Rokhsareh has appeared in the Guardian and accepted public speaking engagements on matters relating to litigation and civil rights in the US, Europe, Iran, and the UK.

She has a deep familiarity with the history and business culture in Iran as well as the legal systems in Iran, US, and UK. She also travels to Iran continually and has a vast network of legal professionals in the US, Iran, and across Europe.

In the time outside of work, Rokhsareh enjoys spending time with family and friends, travelling, and the gym.

‘Rokhsareh was introduced to me by a mutual friend. I found her highly professional and efficient. She gave me clear and concise advice and helped me solve my particular problem successfully. I would highly recommend her.’

'I contacted Rokhsareh regarding the restriction of my bank account. Rokhsareh quickly determined the restriction was due to the bank's fraud suspicions that could have destroyed my financial status in the UK for a very long time. The issues had resulted from the roguery and misconduct of a money exchange company. Thanks to Rokhsareh's diligent help and skilful legal expertise, my banking issues have been completely resolved and the bank has agreed to continue acting as my bank. I am extremely grateful to Rokhsareh for resolving this serious matter in a very short period of time and I would highly recommend her.'

‘Rokhsareh provided a service of the highest standards. Her advice was professional and well-informed and resolved my issue with ease. I can imagine that Rokhsareh has a heavy workload. Nevertheless, she responded to all correspondence promptly, and was available for phone conversation. In all of our conversations, she was not only professional and effective, but also friendly and comforting. Frequent and easy communication with her made the process much easier for me. I will definitely come back to Rokhsaeh if a similar case arises for me, and recommend seeking her service to anyone with similar issues.’

‘It was a pleasure having Rokhsareh represent us. Her communication was always quick, clear, and concise, and she showed a great deal of empathy and professionalism throughout. She’s an asset to RFB and has my highest possible recommendation’.

‘We were extremely satisfied and grateful for your expert advice and support’.

‘I would like to take this opportunity to thank Rokhsareh for her service and for successfully closing the case’.

‘Rokhsareh is very professional and precise. A great asset to the firm’,

‘I first contacted Rokhsareh when an issue was raised by my bank. I’m pleased to say that Rokhsareh has completely resolved this matter for me. Throughout the whole process she was very professional, responsive, and always happy to answer my questions. I am extremely grateful to her and cannot recommend her highly enough. ’,

The complexities of transferring funds from Iran to the UK

Successful Defence Against Forfeiture of Over £440,000

Successful Defence Against Forfeiture of Funds by HMRC

Withdrawal of Account Freezing Order Applications by Police on Over £1,280,000

j.ocallaghan@rfblegal.co.uk John qualified as a solicitor in 1983 and has been a partner in the firm since 1990. John has a broad base of experience in the law with many longstanding client connections, and is a Recommended Lawyer in the 2019 Legal 500, singled out as 'a real expert in the field who knows his game'.

r.rahim@rfblegal.co.uk Rakeebah has been practising at the firm for over 25 years. As Managing Partner, she has been and remains instrumental in developing the firm’s strategic direction and embodies the firm’s core values.

d.oguzkanli@rfblegal.co.uk Deniz Oguzkanli heads the firms International Investment Department. He regularly acts for overseas investors in their commercial and residential deals and property transactions in the UK.

s.hung@rfblegal.co.uk Sarah Hung is a Real Estate lawyer and Legal 500 Recommended Lawyer for commercial property. She has extensive experience in commercial property with a particular focus on investment and development transactions and licensing work.

r.ramdarshan@rfblegal.co.uk Rudi Ramdarshan is a Partner and accredited mediator specialising in commercial and property litigation from the firm's West End office in Baker Street, London. He is recommended in both practice areas with the directory describing him as a 'formidable litigator', 'excellent tactician' and 'a walking encyclopedia of litigation knowledge'.

d.burns@rfblegal.co.uk David Burns is a partner specialising in property and commercial litigation from the firm’s West End office in Baker Street, London.

p.cain@rfblegal.co.uk Paul Cain is a Partner in the Real Estate department and has been a Legal 500 Recommended Lawyer for a number of years.

r.roberts@rfblegal.co.uk Rebecca is a Partner at the firm, practising at our London City offices. She specialises in Company and Commercial work and also has experience in the associated fields of Employment and Commercial Litigation. She is a Legal 500 Recommended Lawyer.

a.nasr@rfblegal.co.uk Afsheen Nasr is a Partner at Ronald Fletcher Baker LLP, with a particular expertise in Property, acting for individuals, businesses and financial institutions. She is a Legal 500 Recommended Lawyer.

p.desser@rfblegal.co.uk Piers is an experienced Solicitor-Advocate specialising in Criminal Litigation. He is a Recommended Lawyer in the Legal 500 2019, leading the 'tenacious' Crime practice.

Mustafa Abbas Mustafa Abbas is a Partner based in the West End Office specialising in commercial and residential property matters.

Gerard Airey g.airey@rfblegal.co.uk Gerard qualified as a Solicitor in 2008 and from that point he practised employment law at one of the UK’s largest employment law firms for just under 11 years. He joined the firm as a Partner in the Employment Law department in 2019.

Devorah qualified as a solicitor in 2007 and joined the firm in 2019 as a Partner and head of the Private Client department.

Tamara re-joined Ronald Fletcher Baker LLP as a Property Partner in November 2019 having been with the Firm previously for over 3 years.

Nishil Patel n.patel@rfblegal.co.uk Nishil is an established immigration solicitor with over 13 years’ experience advising with corporates, businesses and individuals with their immigration matters.

Jonathan Chan Jonathan Chan is a Solicitor based in the West End Office specialising in commercial and property litigation.

Ben Frost Ben Frost is a solicitor and accredited mediator in the firm’s commercial litigation and property litigation team at the West End office.

Adam Bowes a.bowes@rfblegal.co.uk Adam is an associate specialising in family law, based in the firm's City Office.

Ali Chouhdry a.chouhdry@rfblegal.co.uk Ali Chouhdry is a solicitor based in the firm’s West End Office specialising in Real Estate.

Chris O'Callaghan c.ocallaghan@rfblegal.co.uk Chris joined the firm in 2011 and trained at the firm working in the private client, litigation, property and family departments.

Yasaman Asaad y.asaad@rfblegal.co.uk Yasaman Asaad is a solicitor based in our West End office who specialises in residential and commercial property matters.

Ahmed Butt a.butt@rfblegal.co.uk Ahmed is a trainee solicitor in the Corporate and Commercial department based in our City office.

e.cetin@rfblegal.co.uk Ezgi is a qualified Solicitor working in our Real Estate Department at our City Office.

v.devji@rfblegal.co.uk Veena Devji is a Real Estate Solicitor in the Baker Street Office and has experience in a variety of commercial and residential property transactions.

Kate Farkins k.farkins@rfblegal.co.uk LinkedIn Kate is a Solicitor in the property team based at Old Street.

Matthew is a solicitor in our Commercial Real Estate department based in our West End office.

Maria Gul m.gul@rfblegal.co.uk Maria is a solicitor specialising in property transactions at our Baker Street office. She deals with sales, purchases and leasehold matters on a daily basis and takes great pride in her work.

Maryann Ibeto m.ibeto@rfblegal.co.uk Maryann is a solicitor at the firm’s Manchester Office, working in the Property department predominantly dealing with residential conveyancing transactions.

Grace Lowry Grace is a solicitor specialising in Property.

Mansour Mansour m.mansour@rfblegal.co.uk Mansour is a qualified solicitor based in the firm’s Corporate and Commercial Department in the City office.

a.mayungbe@rfblegal.co.uk Adebola has practised at Ronald Fletcher Baker LLP since 2009 and specialises in serious and complex crime within the London area and surrounding counties.

Michael Michaeloudis m.michaeloudis@rfblegal.co.uk Michael trained, qualified and worked in Legal 500 and Chambers and Partners leading national employment law firms. He qualified as a Solicitor in 2009.

Tanaz is a specialist commercial property lawyer and heads a Commercial Property team at Baker Street. She is experienced in acquisitions and disposals of commercial property, leases of retail, office and industrial units, licences, deeds, option agreements and refinancing.

s.ozcan@rfblegal.co.uk Selda Ozcan joins the firm as an experienced property solicitor having been a Partner at a successful practice in North London.

j.roberts@rfblegal.co.uk Jonathan Roberts After obtaining a degree in Modern History at Oxford University, Jonathan joined the firm as an articled clerk in 1973. In 1976 he qualified as a solicitor and became a partner in 1982, and senior partner in 1989. 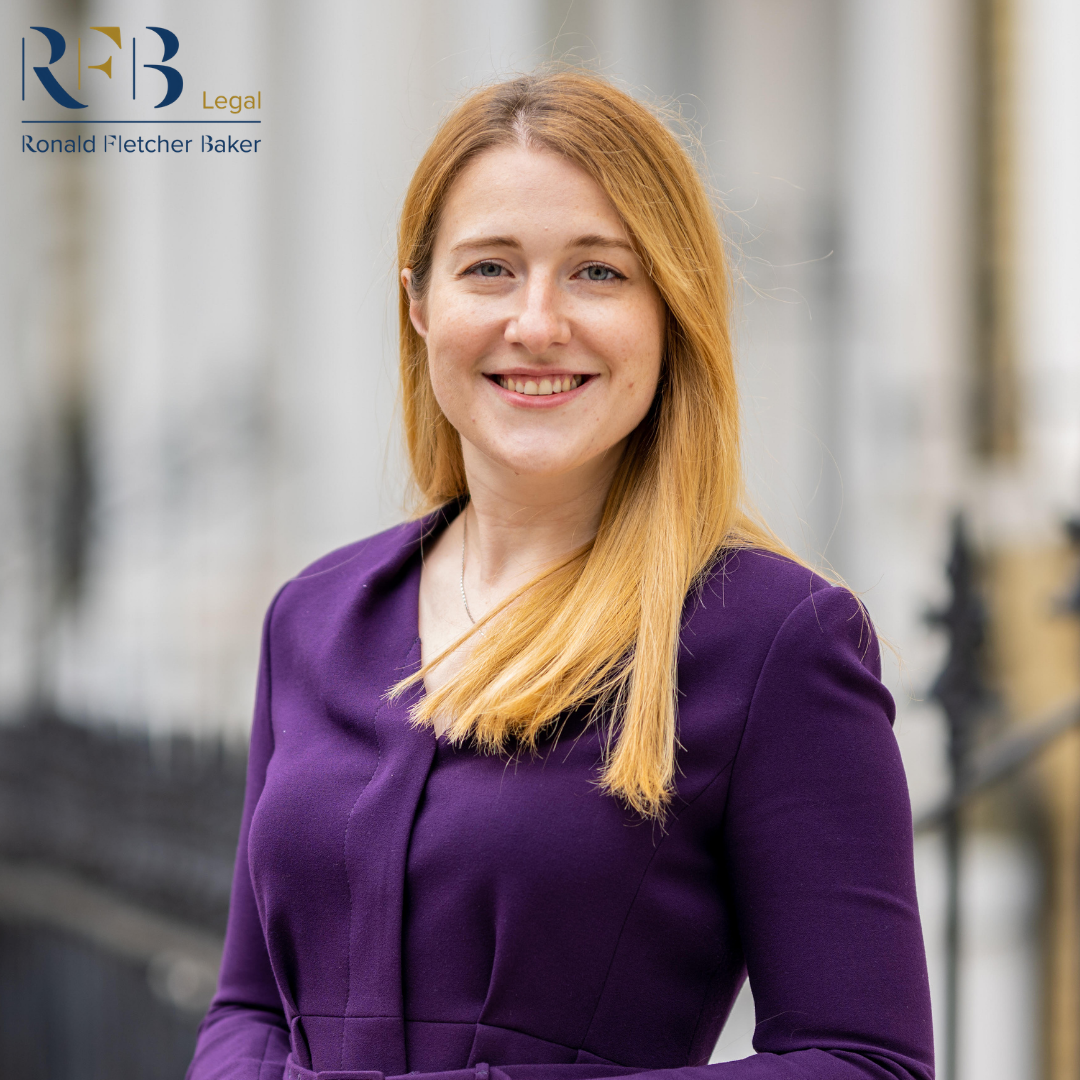 Ellen Sanchenkoe.sanchenko@rfblegal.co.uk Ellen is a solicitor in the Criminal Litigation and Business Crime Department with particular expertise in advising companies and individuals in relation to fraud, corruption allegations, money laundering and across the broad spectrum of financial crime.

Rebecca Sewalir.sewali@rfblegal.co.uk Rebecca Sewali is a solicitor in the Corporate and Commercial department based at the City Office.

Rokhsareh Vahid r.vahid@rfblegal.co.uk Rokhsareh joined the firm in 2017 as a Sanctions and Banking Specialist. She assists Iranian individuals and companies in relation to all aspects of UK law as well as non-Iranians with their Iran-related matters.

Kristel Wan k.wan@rfblegal.co.uk Kristel is a solicitor at the firm’s Manchester office, working in the Property department principally dealing with residential conveyancing transactions.

b.wong@rfblegal.co.uk Bik Wong is a Solicitor specialising in Family Law in the firm's City office.

Ran Yu r.yu@rfblegal.co.uk Ran Yu is a solicitor in the Real Estate Department based at our City Office in London